"Is Twitter turning us all into narcissists or is there something else at work here?... 80% of Twitter users are “meformers,” posting Tweets that focus on their day to day life...Why is this? It’s because Twitter makes them feel important."

We hear it all the time: "Twitter, really? Isn't that the place you go when you want to talk about what you ate for lunch? No way, that's far too narcissistic for me..."

Let's be real—yes, there are a lot of people who use social media to connect with celebrities, rant about nothingness, and waste time. However, to throw out the 140-character baby with the bathwater would be to ignore a nugget of truth: there are some fabulous educators using Twitter to connect to other teachers, exchange ideas, commiserate over problem students, celebrate successes, and generally learn from eachother. Don't believe me? Take a look at this:

Scroll through some of these live tweets—things teachers on Twitter are actually talking about right now—and tell me that there's not one link, one idea, one picture, or one concept that doesn't make you perk up. Not going to happen. There's a treasure trove of information available to teachers on the internet, right under your nose—the trick is knowing how to find it. Luckily for us, the people who know how to find good stuff tend to want to share it, and overwhelmingly, they choose to send it with Twitter. 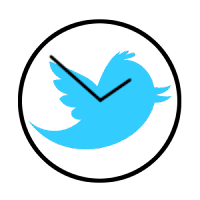 You might be saying to yourself "Ok, so Twitter has some cool value, but I don't have time for all kinds of tweeting and posting and finding stuff out. Is this going to take up all of my time?" Here's the truth—it doesn't have to. If you want to spend 5 minutes a day on your Twitter stream looking through some of the cool stuff that people are posting, that's a great start. If you start finding a person here or there to follow and maybe expand to a few doses of Twitter a day, even better. At some point, you'll want to start talking to other educators who are similar to you, so you could join #teachSDA's hour-long chat and get into some excellent extended discussions. The point is that Twitter doesn't have to be a time-sucking activity—join in when you want, and leave when you want. No pressure!