So if you're a Seventh-day Adventist with an internet connection, you probably know that for the last week, in San Antonio, Texas, the General Conference has been having its big once-every-five-years meetings. It's an important calendar item where our church leadership meets together to realign, elect some people, and make some important decisions.

So much can be said about what happened over the week—so much has been said, and with only the slightest amount of Googling, so much can be learned—but let's not focus on that. While there were definitely winners and losers, there's one important result that few others have brought up:

I mean, seriously: my personal timeline was scrolling faster than I could even go through. Apparently, the official hashtag #gcsa15 was the #1 trending item in San Antonio and Australia. And, thanks to a little entire afternoon of research on "Twitter Analytics", we now know that there were 89.3k mentions of the #gcsa15 hashtag:

Social media was victorious for the last few days, with Facebook, Instagram, and especially Twitter running amok with Adventists. As a total tech nerd, that fills me with so much excitement, for a couple of reasons:
That last one especially strikes me as important. It's important for teacher to have support systems of other educators who get what they're about, what they're teaching, who they're teaching, and so on. Since day 1, the goal of #teachSDA has been to build connections, cultivate professional growth, and strengthen community among Seventh-day Adventist educators worldwide—it's what our prime focus is. Our tool of choice is Twitter, a tool that, up until this last week, I thought was lost on the remnant church.

So yada yada yada, wheels began spinning, tweets were tweeted, and idea was hatched: let's have our own online summer Edcamp, tailing off the energy of #GCSA15! In the Edcamp "unconference" style, we'll show up on one day, determine what we're talking about, and have an hour-or-two conversation about school, students, education, WHATEVER. In other words, let's do our own THIS:


Having done a couple online Edcamps before, I can assure you that determining the topics is easy, and training everyone how to use Google Hangouts isn't particularly difficult—the big thing will be getting a crowd that wants to talk. Luckily, after I posted this poorly-worded tweet:


Out of curiosity, how many Adventist teachers are on Twitter? Any interested in am ad hoc unconference in... Say, a week? #gcsa15 #teachsda
— Chris Webb (@webby37) July 9, 2015

A number of awesome educators came forward and expressed interest in getting together and having a little chat. The big question, though, was when? When is this going to happen?

So this is where we are now—who's in, when can they be in, and when can't they be in? Please take a minute to fill out the form and let us know who you are, how we can reach you, and what times you could you make this inagural conference!

Please, also, if you can—share this blog, Twitter account, and (especially) this form with your colleagues. We can create a truly one-of-a-kind experience that so many of our colleagues haven't been able to participate in, but it all boils down to spreading it. Let's do this! 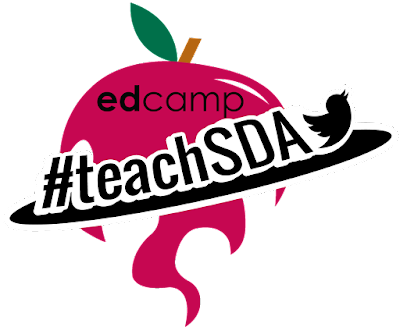