Slow chat with us!

This weeks slow chat topic is from a series on Dwight D. Eisenhower.  I lived next door to Abilene, KS the birth place of "Ike" and spent many hours in his Presidential Museum.  I always appreciated his leadership style.

Leadership Lessons from Dwight D. Eisenhower #2: How to Not Let Anger and Criticism Get the Best of You 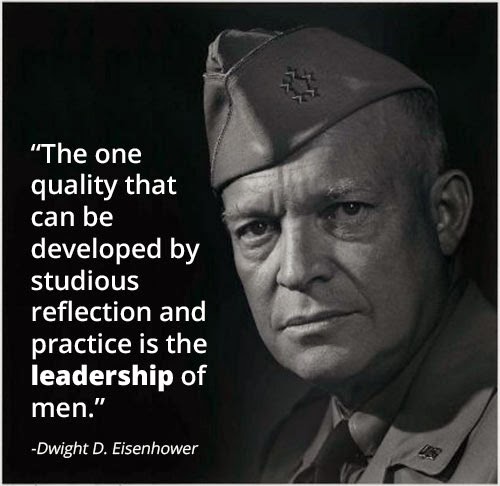 On the Halloween when Dwight D. Eisenhower was ten years old, his parents let his two older brothers go trick-or-treating, but told Ike he was too young to accompany them. Having eagerly anticipated a night of fun and freedom, Dwight was crushed. He argued his case for why he should be allowed to go out, begging and pleading with his parents to change their minds until his brothers at last headed off into the night without him. Completely beside himself with rage, Ike went into the yard and starting pounding away at the trunk of an apple tree, pummeling the bark until his fists bled. His father finally pulled the boy away, gave him a few swats with a hickory stick, and sent him off to bed. Ike sobbed into his pillow, feeling like the whole world was against him.
After an hour, Eisenhower’s mother came into his room and sat down in the rocking chair beside his bed. She rocked silently for awhile, and then began to talk to young Dwight, telling him she was concerned about his anger, and that of all her boys, he had the most to learn about getting his temper under control. But striving to do so and gaining self-mastery, Mrs. Eisenhower continued, was vital. “He that conquereth his own soul is greater than he who taketh a city,” she told her son, paraphrasing the Bible. Then, Ike remembered, she offered him a piece of life-changing advice:

“Hating was a futile sort of thing, she said, because hating anyone or anything meant that there was little to be gained. The person who had incurred my displeasure probably didn’t care, possibly didn’t even know, and the only person injured was myself.”

As Eisenhower’s mother applied salve and bandages to Ike’s wounded hands, she reinforced her point by noting the way in which his heedless anger and resentment had changed nothing and only damaged himself.
Dwight calmed down, apologized for his outburst, and fell asleep. While Eisenhower’s parents never brought up his Halloween outburst again, for Ike it was a turning point; “I have always looked back on that conversation as one of the most valuable moments of my life,” he said. Of course, it was not the case that young Dwight jumped out of bed the next day and never had trouble controlling his anger again. When it came to criticism, he was sensitive and thin-skinned, and his white hot temper continued to flare up from time to time, turning his face bright red, raising the hair on the back of his neck, pumping him fill of adrenaline, and rendering him insensible; once he got going, his anger would possess him and he would “blaze for an hour.” Ike could see that these bouts of blind rage would prevent him from ever becoming an effective leader: they wasted his time and clouded his judgment. “Anger cannot win, he said, “it cannot even think clearly.”
And so for many years, Ike “made it a religion never to indulge” in these fits. In addition to applying simple discipline to his emotions, he developed the following method for controlling his anger towards others:

“To this day I make it a practice to avoid hating anyone. If someone’s been guilty of despicable actions, especially towards me, I try to forget him. I used to follow a practice–somewhat contrived, I admit–to write the man’s name on a piece of paper, drop it into the lowest drawer of my desk, and say to myself: ‘That finishes the incident, and so far as I’m concerned, that fellow.’
The drawer became over the years a sort of private wastebasket for crumbled-up spite and discarded personalities. Besides, it seemed to be effective and helped me avoid useless black feelings. The device applied, of course, to things purely personal. During World War II, there was no question of the deep-seated hatred I felt for Hitler and all that he stood for. But there were ways to deal with him other than the drawer.”

Eisenhower had plenty of chances to use his anger drawer during his time as Supreme Commander and later during his political career. During the war, Ike was vexed by the way journalists who, thousands of miles away from the action, and pressured by a deadline, would spin a complex set of events into a simple explanation, often by placing the blame for something on a single individual. “The search for a scapegoat is the easiest of all hunting expeditions,” Eisenhower wisely observed. And the scapegoat was sometimes Ike. “In the stories that began to circulate about me,” Eisenhower wrote about his war years, “I should have seen the ample warning that the printed word is not always the whole truth.”  But armed with his anger drawer, Ike was able to take the criticism in stride and get back to work; when a negative opinion of his leadership came to his attention, “the hoked-up details usually provoked from [him] no more than a grimace or, once in a while, a hearty guffaw.” Reading about Eisenhower’s method of dealing with his anger towards others really delighted and intrigued me, so I thought I’d try it out for myself. Try as I might not to let it, occasionally something someone says or does can really get under my skin. I’ll find myself angrily thinking about it during the day which makes it difficult to concentrate on my work.
Eisenhower’s anger drawer sounded like a good idea, but having all those crumpled up pieces of paper piling up in my desk didn’t seem cathartic enough. So I gave Ike’s method my own twist and bought an ashtray with a skull on it. I would tear off a little strip of paper, write down the name of the person or the situation that was bugging me, and then burn the paper with a match.
I found that the paper didn’t burn up very well and created a lot of smoke and ash, so now I use little pieces of flash paper (which flames up and then amazingly vanishes altogether–it’s so fun to use I have admittedly almost been hoping for someone to bug me…). One touch of the match—and poof!—the anger and resentment goes away and I smile and get back to work.
Oh, and why a skull? Because as the paper burns, I can look at it, think of my own mortality–my own skull sitting under my skin–and reflect on how pointless it is to waste time thinking about people who don’t matter. I look at that skull and Ike’s words come to me: “Never waste a minute thinking about people you don’t like!”
Somewhat contrived, as Eisenhower put it? Sure. But it’s a great way to break the cycle of pointless rumination.
____
Even with ironclad discipline (after smoking four packs of cigarettes a day for decades, Eisenhower decided one day to quit and never picked up a cigarette again) and the help of his anger drawer, Ike’s temper still flared up now and again. But these little bursts, Eisenhower believed, could be beneficial as long as they didn’t last long:

“A quick explosion, as quickly forgotten, can sometimes be a necessary safety valve. I think my mother might have agreed.”

Leadership Lessons from Dwight D. Eisenhower Series:How to Build and Sustain MoraleHow to Not Let Anger and Criticism Get the Best of YouHow to Make an Important DecisionAlways Ready
Sources:
Eisenhower: Soldier and President by Stephen E. Ambrose
At Ease: Stories I Tell to Friends by Dwight D. Eisenhower
Posted by Stephen at 7:18 AM