Badges? Uh, we got stinkin' badges. 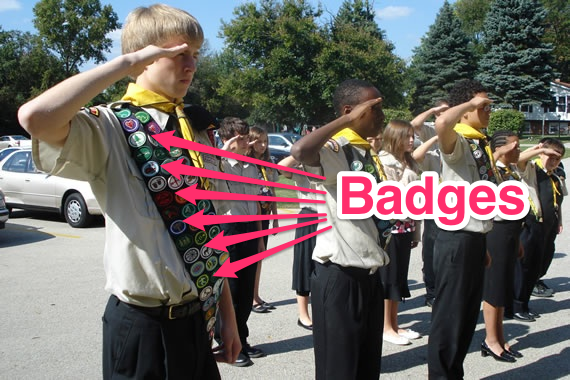 I was never in Pathfinders [cue audible gasp from the Adventists]—in fact, as a non-Pathfinder, I always found those kids who showed to church dress like Boy/Girl Scouts kinda dorky*—but as an outsider, I was always fascinated by the sash of Pathfinder Honors that they'd wear. It wasn't the colors or designs or even just the token of the Honors that intrigued me; it was the idea that each of those things were earned for learning something, or completing a task, or attending an event. I think that, even as a young kid, I loved the idea that accomplishing more earned you more rewards, and rather than hiding their accomplishments, there were people who took pride in what they'd done and chose to wear those accomplishments as badges of honor.

It shouldn't be a surprise, then, that one of the hottest topics in education—badges—recently caught my attention. To oversimplify the badge movement, teachers are taking one of the reward systems typically used in games and applying it to their courses. While some students will push for an A just because that's what they want, other students who might not be similarly motivated might need an additional extrinsic token to get them going. By completing course objectives, students can earn merits that they can proudly display to their peers.

(Sound vaguely familiar? Remember a few weeks ago when #teachSDA explored the idea of Gamification? Well, badges works hand-in-hand with a gamified class!)

Badges are being used in a variety of educational resources, such as Khan Academy, Edmodo, Class Badges, and many more. However, many of those badging systems are limited to their own universes, so accomplishments achieved in different systems can't easily be shared across platforms. To me, that's what makes Mozilla's Open Badge Backpack so awesome:

So what's the point? On Friday afternoon, my Twitter pal +Josh Gauthier (@mrgfactoftheday) made reference to a badge he'd just created with the wildly-underrated Google Drawings, and it got the wheels in my head spinning. After a pretty-exhausting 5-houre binge on just about everything I could reasonably learn about badges, it all came down to this:

Starting this week, #teachSDA will begin utilizing Credly to share a weekly Open Badge with chat attendees. Answer a few questions, tweet out a great link or two, and we'll send you a badge for that week that you can add to your Credly accounts. Those badges can easily be exported to Mozilla Backpack, making your badge portable, secure, and personalized to you. Think of it as a souvenir for joining in on our conversation!

Is #teachSDA the first edu-chat to offer weekly badges for joining in on our discussion? No idea... but I for one haven't heard of anyone else doing this as of yet. It's a little bit of an experiment on #teachSDA's side, but we're hoping it'll be something our PLN will appreciate collecting with us.

For more really great resources connected to badges (specifically for your own classroom/school usage), check out these great links:


*Classic coping mechanism: "When not a member of a tribe, think of yourself as better than those in the tribe to deal with being excluded."
Posted by Unknown at 9:56 AM

Email ThisBlogThis!Share to TwitterShare to FacebookShare to Pinterest
Labels: Badges